Windows have a very important function in any home, specifically designed to be the primary source of ventilation and light, perhaps the most valuable contributors to a healthy, ambient home, as well as contributing to sound control. Fresh air and natural light are even more highly valued in regions of the United States prone to inclement weather and extreme climate conditions, such as Wisconsin. Even more than these vital functions in the home, windows can be the most expressive feature in a luxury custom built home and should be granted a high profile in the architectural design elements.

Over the years and centuries, window designs have evolved with variations in size, sash patterns and shape, along with architectural styles that have influenced them. Additionally, changes in material options for windows over the past two centuries influenced design changes, as steel and aluminum became feasible alternatives to the standard wood framing used prior to the 20th century. Wood windows have always been popular because of their depth and beauty, the versatility to be painted any color or stained to bring out the beauty of wood grain, while matching to any home. Steel window casements became popular post WWI; their minimal frame thickness allowed for unobstructed viewing, allowing for homes to maximize fantastic views. Similarly, aluminum windows, including single hung, slider and casement became popular in the 1950s, as aluminum was lower maintenance and also required minimum framing to bring in maximum light.

Many modern luxury custom homes today have capitalized on this style of window to maximize their fantastic views; advances in technology in building materials has made it possible to have custom wood casements that allow for similar advantages: unobstructed views while providing a seamless extension of the beautiful architectural lines of the home. 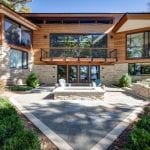 The evolution of treated glass, glazing and the insulating glass we take for granted today has dictated even more so the changing styles and functions of windows over the centuries. While glassmaking was advanced during the Roman era, glass paned windows were among the many technologies and comforts that were lost with the fall of Rome. While cathedrals across Europe commonly boasted stained glass windows, virtually all domestic windows were unglazed, which increased the importance of wooden shutters to keep out the cold. Curtains further helped with insulation; thus, interiors tended to be dark with fireplaces offering the most consistent light. It was not until the mid-16th century that window glass was more common, but it was still found only in the most important rooms of luxury homes.

Glass was a precious material well into the 19th century before it became an accessible building material for windows for the middle class. A century of various engineers from many countries vying to create the strongest, clearest and flattest window glass led the way for glass panes to finally become a common, practical solution for design and function. Yet the “framing” of these precious portals had their own established history due to practical considerations for insulation. Artisans and craftsmen over the centuries personalized, decorated, carved and created unique designs to enhance the shutters or window coverings that protected their homes and also added beauty as a result. The luxury custom built home today can draw upon this tradition without need for true functionality, as a way to enhance the window’s expression, such an integral part of the architectural flow. 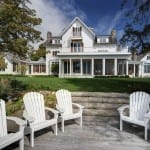 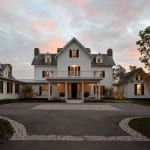