Windows are perhaps the most important factors behind the “look and feel” of a new custom home. In addition to form and function, the passing of light and allocation of views, they are an integral part of the home’s overall architectural theme. From the exterior, windows, their placement and any ornamentation, should enhance the home’s architectural lines. On the interior, windows provide the views and natural light around which rooms are designed. Whether an interior or exterior vantage point, windows are the portal, the eyes and perhaps a glimpse into the soul of the house or the world outside.

Framing the windows from both the exterior and interior provides limitless opportunity for individual design expression. They may take a back seat to the views they are presenting, serving as an invisible protection and seamless transition from indoors to out, particularly with modern lake homes. On the other end of the spectrum is creating more distinct lines, whether simple or ornamental, with trim, tapestries or draperies, shutters, blinds or decorative additions.

On the exterior, windows are an integral part of the lines of the home’s architectural lines. The modern lake home may typically minimize wall space to maximize the viewpoint to the outdoors, including minimal ornamentation. Clean lines and lack of ornamentation blur the lines as the natural environs are incorporated into the home’s existence. The following homes exemplify just this coexistence with their properties’ abundance: 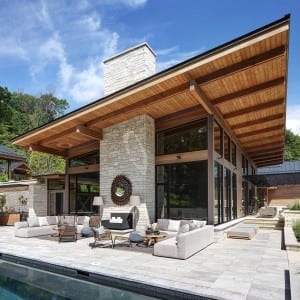 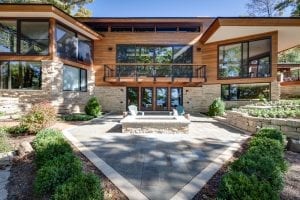 The tradition of shutters was introduced more than 500 years ago in Tudor England prior to the use of glass windows with the purpose of allowing light and ventilation when needed. Today, shutters allow for simple ornamentation and splashes of color to traditional homes with a simple palate on the exterior. The following two custom homes exemplify the use of shutters to add a punch of color and character to their home’s majestic exterior. One home shows only a few well placed shutters as accents to the windows, while the other creates a pattern throughout the exterior that complements the home’s architectural feel. 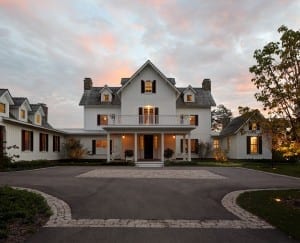 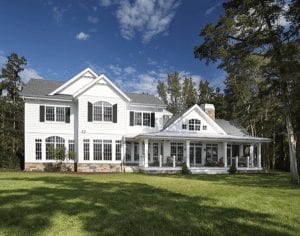 Window placement and shape can provide an unexpected deviation or add an air of whimsy to the home’s architectural lines. Circular or “rose” windows are a classic example of windows adding an ornamental touch, with two variations shown below. The boathouse evokes portholes or the “scuttles” on boats, while the traditional lake home reflects the classic rose window accent. 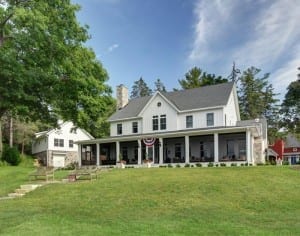 In contrast, the clean lines of square windows seem to perfectly complement the sweeping curves of the masterful lake home shown below. In particular, the cupola that serves as the home’s focal point from the lake vantage point. 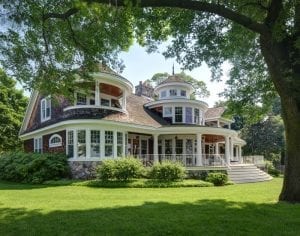 And, finally, the contemporary lake home below lacks curves in its architectural flow; instead, its very linear design is transformed by multiple layers of windows and dormers.  The dormers maximize the natural light, the walls of windows the epic lake views. Note also the choice of material for its railings, ensuring uninterrupted views and a continuation of the home’s clean lines. 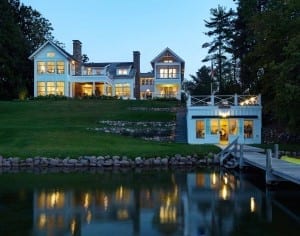 Build a Custom Home, Yes, Even in the Winter!