Home/Colby Construction Blog/Lakeshore Living: “A Chenequa Home is a Tribute to This Family’s Past”

This article was featured in the July issue of Lakeshore Living, Lake Country Edition. Enjoy!

As a kid, Andrea “Ace” Rendleman spent summers rambling around 77 acres of land in the serene Chenequa countryside, joined by her sister and cousins. Her great-grandfather, famed Milwaukee architect A.C. Eschweiler, Sr., had purchased the land as a family getaway in 1904. At the time, it contained a few homes, some outbuildings and Mud Lake (today called Cornell Lake), one of three in a small chain. “I had a wonderful childhood running around barefoot, dropping in on relatives and going on tractor rides,” she says. 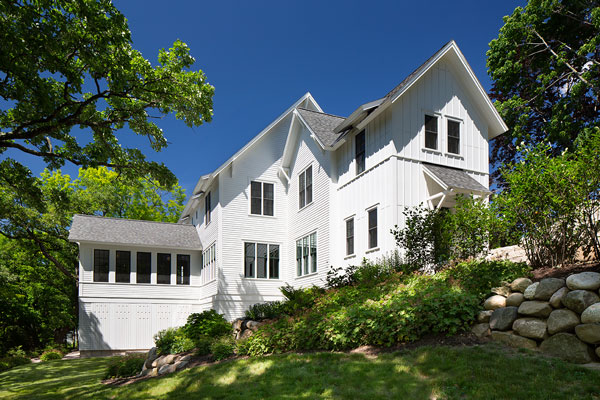 Despite Eschweiler’s architectural pedigree, he never designed any structures for the land. Instead, he tinkered with the existing buildings, moving one home down a hill at his daughter’s request, and expanding an old shed into a cottage. He also loved to recycle. The shed-turned-cottage, for example, contains impressive leaded-glass windows in the dining room, which he discovered while working on one of his projects. 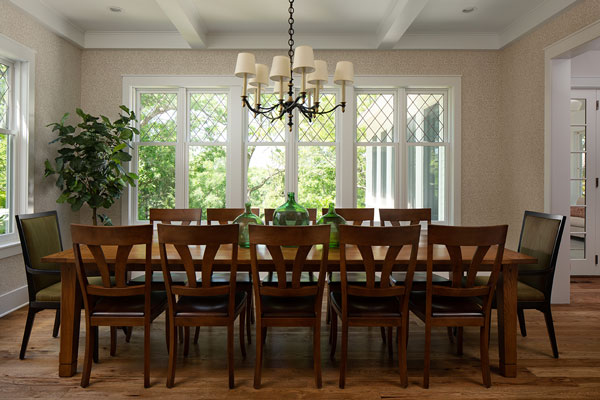 As the decades passed, the family land was whittled down to 27 acres. Rendleman’s parents inherited the cottage, while other homes were passed to relatives. After Rendleman married her husband, John Rendleman, the two continued the cottage tradition, bringing their four daughters there every summer from their home base in Carbondale, Illinois. When Rendleman’s parents passed away in 2012, her sister ended up with the cottage. So Rendleman purchased a 2.5-acre plot just up the hill to create a retreat of her own.

The land contained a farmhouse original to the property, which she hoped to renovate. But after walking through it with Pete Feichtmeier of Delafield’s Colby Construction, plans changed. The farmhouse was too far gone to remodel, Feichtmeier said, noting it was best to tear it down and rebuild. So the farmhouse was demolished in 2017, and a year later the white clapboard home, which she named the Lake House, stood in its place. 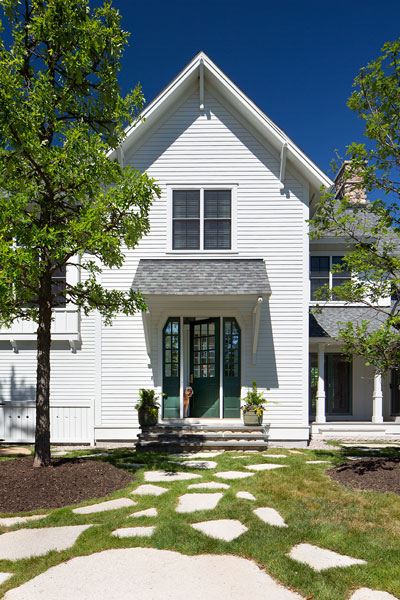 The 4,200-square-foot home, with six bedrooms and four baths, is much larger than the old family cottage. And, of course, it’s filled with modern- day amenities. But its design and décor pay homage to her beloved summer home, evoking its warm, inviting feel. So, there isn’t an open floor plan, but rather individual rooms. A homey table and chairs sit in the kitchen in lieu of a super-sized island with stools. Much of the furniture is covered with the popular nubby fabrics and small florals of yesteryear, and wallpaper is sprinkled throughout. It has a sense of beauty and timelessness that Rendleman and Colby were able to capture perfectly. 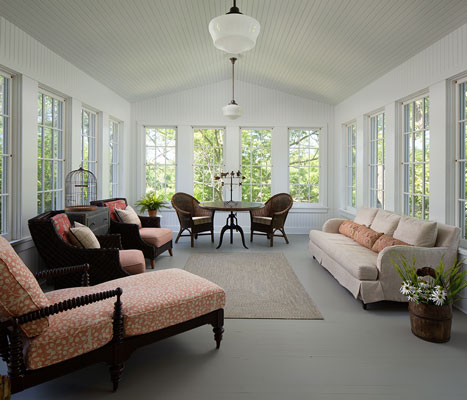 A few paces from the Lake House, a three-story, barn-style garage sits on the site that was once home to a weathered barn. It has space for boat storage on the lower level, plus a 2,800-square-foot studio on the third floor. Now used for guests, the Rendlemans hope one day it will be filled with grandchildren coming to summer with them, continuing the tradition begun by A.C. Eschweiler, Sr., more than a century ago.

“So much of my identity is this land,” Rendleman says. “I told my husband the deal is that I get to be here every year, from planting season to harvest.” 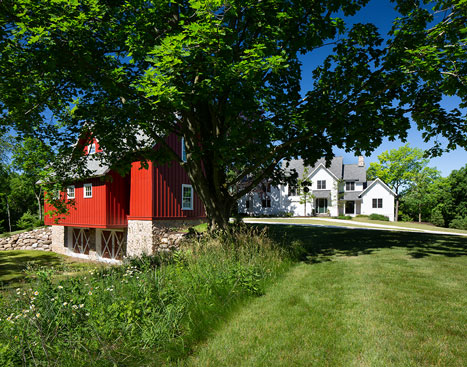 The island’s butcher block top was crafted from a maple tree that once graced the property, while the sink top came from an old barn, also on the acreage. 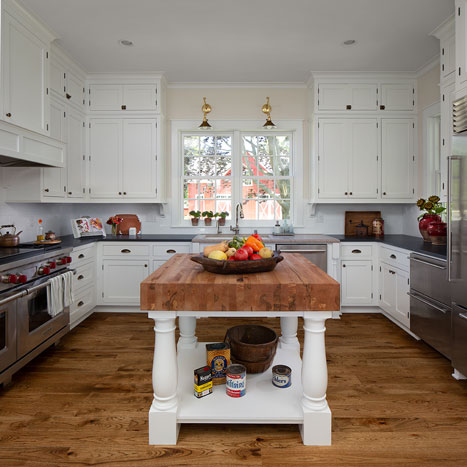 Faceted crystal doorknobs reflect the home’s 1930s-era design, while the oak-leaf wallpaper pays homage to the oak savannah that once covered the land. 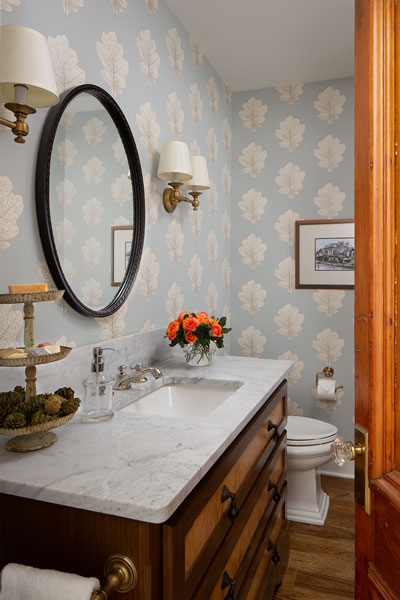 The living room décor and color scheme are based on the color palette and textures found in the cottage — lots of sage, chocolate and tan, plus nubby textures. 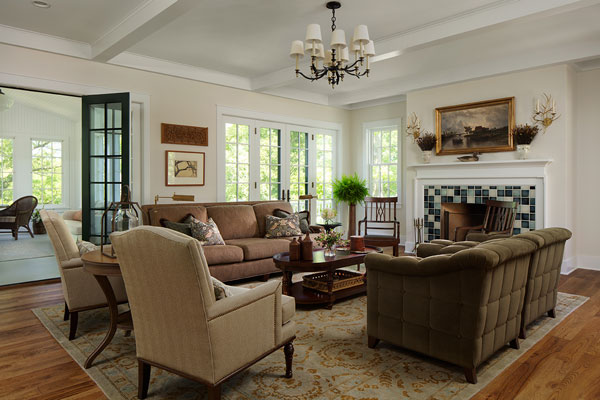 Jeff Harting of Chicago’s GTH Architects designed this table specifically for the dining room. It’s crafted from oak trees felled to make room for the home. 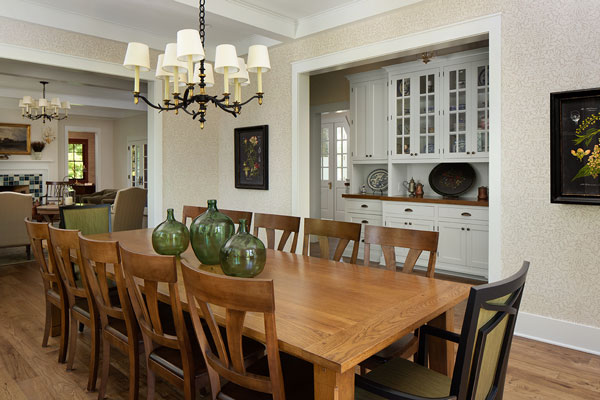 A repurposed farm door and ceiling beams highlight this bonus room that can be used to accommodate guests. “People love to sleep up here,” says Rendleman. “It has a wonderful, peaceful vibe.” 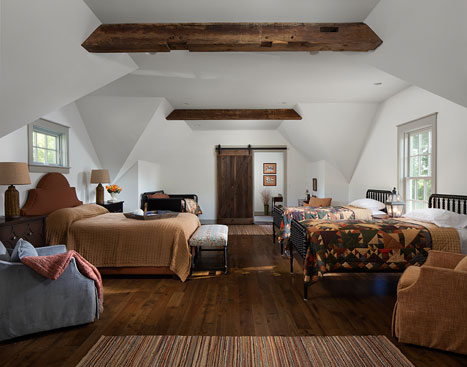 When it was time to tile the shower in the owner’s bathroom, architect Jeff Harting of Chicago’s GTH Architects sketched this design on the spot. “People love it,” says Rendleman. 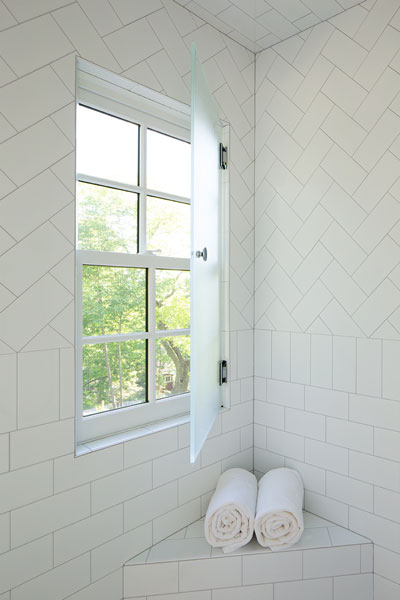 Coved ceilings, like the one in the owner’s bedroom, were popular a century ago. Colby Construction’s Jim Angle, the project manager, says the technique was often used to raise the ceiling height. 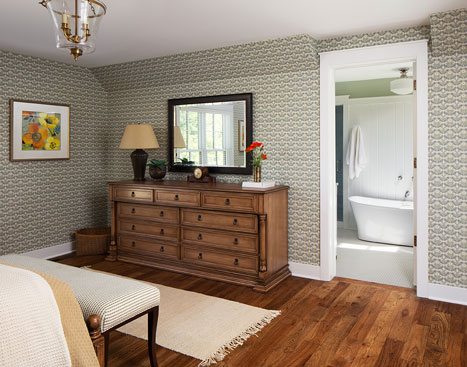